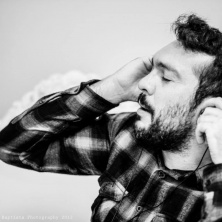 DJ - Dj for more than 20 years in Portugal for a wide broad of ages and nationalities.

Romeu is a Music selector from the south of Portugal, where for the last 20 years, he has been enhancing various spots musically. With his broad spectrum of music, he can pick up a crowd and make it a solid dance floor or he can deliver a soundtrack to unwind at the poolside. Always knowing which record to pull out of the bag, he picks up his listeners and takes them away on a journey. In 2012 his journey took him to Oslo in Norway where he discovered the peculiar relationship between the Northern Lights and the warm tropical disco fueled grooves. In 2015 the destination was Lisbon, the upcoming, vibrant capital of Portugal. After playing in some of the best-rated music spots, Romeu is a founding member of the team organizing ela, east Lisbon afters. Ela made itself a name in the Lisbon nightlife, attracting a happy and diverse crowd with its excellent vinyl selectors combined with a relaxed, familiar atmosphere. Together with Ruben Fernandes (Matizz), Romeu now hosts a monthly two-hour show in Rádio Quantica. Alf Keil is dedicated to share music that goes beyond the usual 4 x 4 and gives the hosts, both passionate diggers, the possibility to air some of their favorite musical treasures, as well as to invite outstanding selectors from around the globe.

Available solo or with Anita, playing Vinyl and Digital.