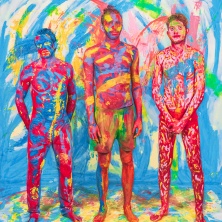 Alessandro is 24. He started to take guitar lessons at seven years. In 2005 he founded with Lorenzo Ferrari his first band called Fail. For 5 years he played hundreds of concerts in Italy and he recorded two studio albums with the band.
At the age of 20 he moved to London, graduating as a guitarist for the famous London school, the Music Tech.
When he came back to Italy, he become the guitarist of The Last Fight, Italian band that was very famous, winning the Heineken jammin festival. He shared stages with a lot of famous bands, including Coldplay, Iron Maiden and Evanescence.
He recorded one studio album with the band.

Marco is 26. He plays bass, guitar and piano.
In 2006 he founded his first band called SunsetBabyDolls, for 7 years he played a lot of concerts in Italy and recorded two EP and a musical video called "Scelgo Io”.
With SunsetBabyDolls he was choosed for a exhibition in RadioRama studio (Eros Ramazzotti) and we won a contest called "La musica nel web” for the best alternative song.
We sharing stages with a lot of famous Italian and international artists as, Lost, MayDay Parade, Marco Masini, Edoardo Bennato, Dolce Nera, Alessandra Amoroso and Vanilla Sky.

Liederliste
1 ora di puro divertimento e buona musica con le canzoni dell'ultimo album dei Seraphins disponibile in tutti gli Online Store!
Biographie
In January of 2014, these three young professional musicians from Italy decided to found a new band and play together after a lot of experiences with other important Italian bands.
They started immediately to compose new songs and record them in their own studio.

The new album "Colorful" is available from September on all digital distributors.
In October 2014, Seraphins will be in Ukraine for a promotional tour.