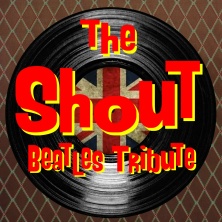 Band - Get onboard our yellow submarine and back to the fabulous '60 for one night: Shout is all you need!

Um aufzutreten brauchen wir: We will send our technical rider on request as it changes depending on the event.

Liederliste
All Beatles songs from the early years to 1970 including Hamburg rock 'n roll years.
Biographie
The Shout came to life in Milan in 2008 with the mission of giving the audience the thrill of a FabFour concert.
In seven years of activity they opened concerts for Quarrymen (first Lennon's band) and several italian artists, cooperated with Zeromobile and Cosmopolitan Magazine and were guests on lots of tv shows in Italy.
After years of gigs, thousands of kilometres behind them and tens of broken strings, the mission is still the same, but more focused, more mature. More Beatles.
Once the four-member formation is consolidated, it is natural to evolve towards a more complete show: The Shout ReLOVEd.
The ReLOVEd show tells the story of the Beatles stepping away from the rules dictated by the London musical Let it Be, making use of the band's irony instead as a key element to that magic decade that literally changed the way of making music.
Pressefoto
2 Bewertungen

4 Jahren
Silke: Super cool, echt hochwertiges Beatle Cover, nette Jungs mit super schönen Instrumenten, haben gute Stimmung gemacht, gern wieder
THE SHOUT BEATLES TRIBUTE: Thank you Silke, it was a great pleasure and we had a lot of fun! Hope to play again for you... in the snow! Peace and Love, The Shout.