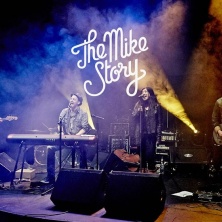 Biographie
Swiss/American singer-songwriter Mike plays High-Energy Piano Rock. The debut album TO BE FREE was produced by Chris Haffner (Myron, Universal CH) and released in the renowned club SUD Basel and is currently being played on Swiss Radio. Next stop is a big festival in Pärnu, Estonia

Swiss/American singer-songwriter Mike plays High-Energy Piano rock. He connects people with his inspirational music, while sharing stories from his life

A touching ballade-driven voice like Bryan Adams, endless live energy like performer Jon Bon Jovi and inspired by piano artists including Gavin DeGraw, Bruce Hornsby, and Billy Joel. All of that supported by a rock band, that will also experiment with Latin and soul elements.

To Be Free is being played on Swiss Radio, the media is enthusiastic and the band was invited to play a huge club gig in Pärnu, Estonia. The Mike Story is rolling, soon near your hometown!
Pressefoto