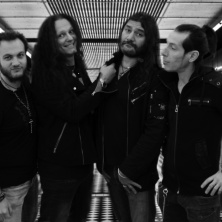 Performing through the years on great stages of various countries, a repertoire of classic Rock Metal from 70s and 80s (AC/DC, Led Zeppelin, Kiss, ecc...) with professionalism and passion that scores between rock and metal fans!

In 2012, after many succesful years of high level performing covers, it became the right time for their first original album release, under the title of “Battito Ribelle”!